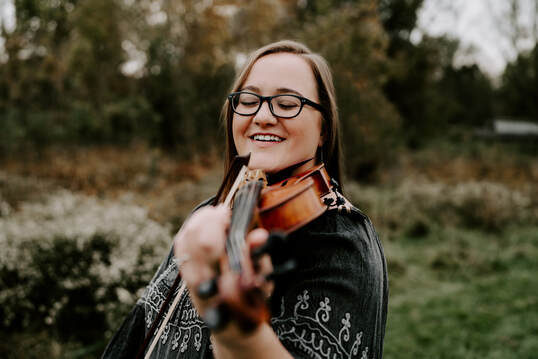 Kendrick At Dawn Photography Cleveland OH 2021
Megan Sullivan, violin, is an active freelancer residing in Cleveland Ohio. Accomplished as both a classical and contemporary performer, she has played hundreds of concerts, weddings, and events with repertoire spanning classical to today’s hits! Megan is experienced in performing, improvising, sight-reading, transcribing, arranging, singing, and studio recording all in a professional setting. A few of her most notable performances include playing with Grammy award-winners Michael Bublé & Josh Groban, as well as the Trans Siberian Orchestra, and the Playhouse Square Orchestra.

Orchestrally, she has performed with The Firelands Symphony in Sandusky Ohio, the Playhouse Square Orchestra, was a member of the Ohio Light Opera pit, and has been a substitute with many orchestras such as the Mansfield Symphony (Ohio), the Kentucky Symphony, and more.

Specializing in wedding music, Megan has also played over 200 ceremonies! She loves playing for weddings, and is able to play any special song request you have. For more information, please see the 'Wedding Services' tab.

Equally passionate about contemporary music, she has played with many bands and ensembles. In recent years, she has performed onstage with Michael Bublé, Josh Groban, Wesley Bright & the Honeytones, and served as the vio-cellist with the Cleveland rock band, Seafair. She has also been seen with bands such as Remember Jones (pop/soul), The Dan Varner Band (country), The Rainbow Emergency (neo-soul), multiple wedding bands, and more. You may also have seen her as the violinist-in-residence at the beautiful Marble Room in downtown Cleveland. Megan also enjoys performing originals and covers using a loop pedal to layer vocals and violin, creating a unique contemporary-classical sound.

In 2014, Megan graduated from the Baldwin Wallace University Conservatory of Music where she was a student of Dr. Julian Ross as a violin-performance major. While at BW, she was grateful for many prestigious opportunities, such as performing in masterclasses with renowned artists such as Takako Masame and Stephen Rose of The Cleveland Orchestra, working directly with acclaimed composer Christopher Theofanidis, as well as playing alongside Cleveland Orchestra members in the BW Bach Chamber Orchestra, all four of her years at BW. During the 2013-2014 year, Megan served as the concertmaster of the Baldwin Wallace Symphony Orchestra.

Megan is originally from Cincinnati, where she studied with Ms. Dorothy Han and Mr. Gabe Pegis. She has attended various prestigious summer music festivals such as AIMS - the American Institute of Musical Studies (Graz, Austria), Interlochen Arts Camp, Brevard Music Center, and The Boston University Tanglewood Institute. In these settings, she worked one-on-one with many acclaimed teachers and performers.

Megan is always searching for new ways to expand her musical knowledge, experiences, and repertoire. Please don't hesitate to contact her with any questions!